Perhaps it was coincidental: The people of Puerto Rico were out in droves, in front of La Fortaleza, the Governor’s mansion, asking for Ricky’s resignation on Bastille Day. Just as the French were celebrating the events that led to the turning point of their revolution against the monarchy, Puertorricans attempted to dethrone their own tyranic ruler, albeit and elected one that no longer represented the views of the proletariat, whose leaked and very telling, Telegram chats had incensed a nation that was already infuriated by a wave of high profile governmental FBI arrests.

This uprising has been an unprecedented and powerful demonstration of the collective strength and influence of a generation that grew up on social media, that knows how to call others to action based on what is just and fair. Businesses closed down on July 17th, just three days later, to give artists such as Ricky Martin (see remarks here), Bad Bunny, Vico-C and Residente time to fly back home and channel the passion already ignited by the cruel and uncouth remarks delivered by Ricky Roselló in response to the even wilder and callous conversations he had with his friends via the instant messaging application. 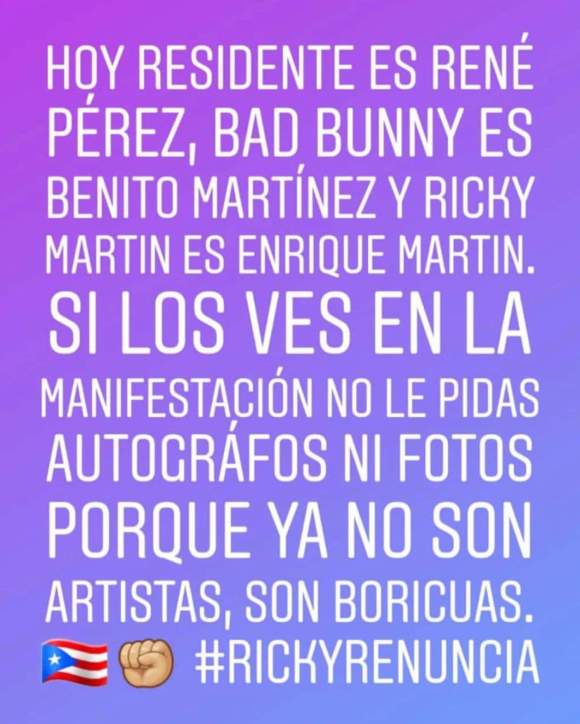 BREAKING: Puerto Rico’s Governor, & 11 current & fmr staff members of his, must surrender their cell phones to the islands Dept of Justice by Friday, as part of an investigation into chat messages appearing to show them engaged in profane & threatening conversations.

For photos of the chat, in Spanish, click here.

Every single opinion expressed in purported privacy with his cronies painted a picture of an indifference of epic proportions. The deaths causes by Hurricane María and the inefficiencies of the First Lady’s Unidos por Puerto Rico aid relief delivery plans laughed off and ridiculed, as if the suffering of the people, who because of the loss of electricity, open roadways, hospitals, food and water, lost family members to disease, and starvation. For them every vicissitude faced by the constituents was reason to joke and vitriol; to ignore the plight of their own people and favor their own interests and greed. The governor claims he was just liberating stress. All hell broke loose after his innocuous yet incendiary affirmation. The public clap back so hard, the memes have become legendary.

Half of the cabinet has resigned by now, and some, like Julia Keleher – the Secretary or leader of the Department of Education – are facing jail time for corruption related charges. Embezzlement. Mismanagement of funds. Awarding government contracts to friends. History repeating itself over and over again. The majority of the people voting red or blue, PPD (status quo) or PNP (statehood) as if the United States Congress and President really cared about wanting to make us a more prosperous part of the union; voting for representatives that had no means to get laws enacted to help develop the island’s autonomy. If cabotage wasn’t a thing, Hurricane María’s crisis would have been a different story. The inability of foreign boats to dock and unload much needed aid due to maritime commerce protocols hindered more than benefited the same officials that so adamantly protect and advocate the measures.

At his 40 years of age, Ricardo Roselló Nevares, son of ex-governor Pedro Roselló, found himself at the head of an administration that very much looked like the reincarnation of his father’s, but unlike his predecessors, all of the crimes and injustices were documented in 889 pages of texts shared between the conspirators. #RickyRenuncia is trending on Twitter worldwide, at the top 10. An entire generation is up in arms asking their contemporary to step down because his views, and the administration’s, do not represent their own. The protests are gaining momentum now, and amidst the Governor’s apologies and regrets, the public is not backing down from chanting “off with his (figurative) head”.

When I left the Island in 2005, I had very little hope of seeing a movement like this, against corrupt rule. I thought the complacency and contentment of the masses would permeate the discourse and that the same people would get reelected every 4 years, perpetuating the myth that as savages of a third world country, second class USA citizens, we weren’t capable of ruling ourselves; of any original thoughts or action plans to better our circumstances.

Watching this Chatgate unfold, and reading through the passionate posts and political displays during the march of my peers, I felt a sense of relief and pride. The new dawn that I never thought would come is peaking in the horizon. My friends all walk towards Old San Juan knowing that this is not the last stand, it is the first of many battles that will be fought for the sake of our children, for the beautiful island paradise and its resilient residents, and for ourselves. We owe each other a better world, a life full of dignity, happiness and opportunity to prosper. It is imperative that we, as witnesses, reflect on this pivotal moment in history and don’t back down and give in to the oppressive democracy faced with today. We, the people, have a right to impeach those whose character proves them unworthy of the responsibilities of leading change, of those legislating bigotry and injustice to infringe the people’s civil rights and liberties. 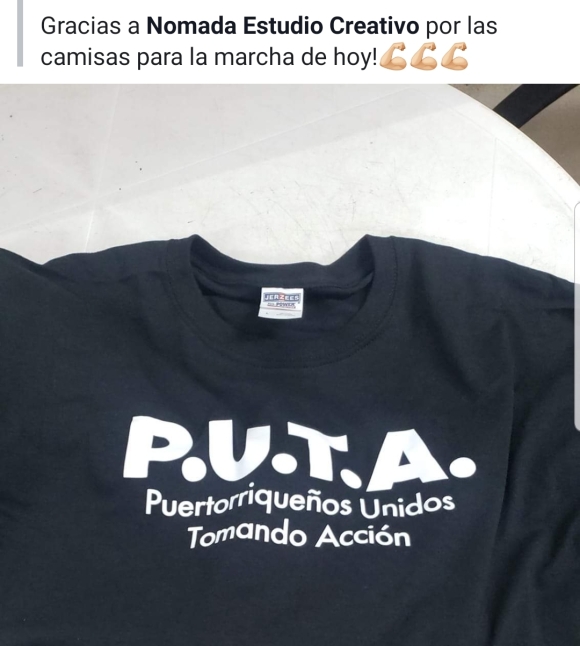 Let this be the time where we go from colonized to conquerors. From puppets to owners of our own destiny. Let’s prove that Puerton Rico does it better. Many in the diaspora already have said “presente” and shown support from all over the globe. Dubai. Barcelona. Seattle. New York…

P.S. There have been reports of vandalism and police brutality which were quickly addressed by self directed volunteer efforts from both parties, protesters and police, to find common ground moving forward. The country will not completely heal until those responsible for infringing on people’s rights and legislating for their own benefit are held accountable. Those served by this administration are clamoring for restitution, for justice, for peace. It’s time for those in power to put on their big boy and girl pants and do what is right, not what is easy…