This year marks the 10th anniversary of my wedding to W. As part of the celebration, I will be documenting our relationship from the proposal up to the wedding, and each year up to our 10th anniversary.

I’m going to be honest. The wedding was the party of the decade, if not the century, for my peeps. It was EPIC for everyone except me. The hell I recall is very diametrically opposed to the heaven W experienced. That’s the true conundrum of being an excellent project manager, no one knows the situation is FUBAR because of how you handle shortages, conflicts and emergencies. I let the spice flow that day and it paid off. To this day my PM mentor uses my wedding story as an example of how bad ass my unique set of skills are in an effort to point out why Plans A through Z are a necessary evil for successful risk mitigation. After that event I knew I could get ANYTHING done. Anything. My brand is making crisis management seem effortless, at great personal sacrifice.

Skeptical? I’ve been trying to figure out how to summarize the day in a way that conveys my optimistic frustration. The dominoes fell so fast I couldn’t enjoy the intrinsic magic of the moment. Waking up at 5 am to pick up my mom and get to the hairdresser’s wasn’t how I planned the day to start. Things got interesting around 10 am when my dad, who was at El Conquistador, 4 hrs early, called to tell us that the venue was changed last minute to a TBD location on the premises. It had been raining all morning and the reserved bluff overlooking the ocean was a mud pit! To avoid further crises and issues at the site, my dad volunteered to hold down the fort until 4pm. 😅⏳ The Old Colonel stayed on post and called everyone that needed to know about updates to the plan, real time, and made a few demands on our behalf to make sure we got our money’s worth.

After I finished talking with the wedding planner about the prep required for ceremony site B, my mom grabbed her golf sized umbrella to usher me safely into the car amidst the downpour. Protecting the make up and 1920s flapper wavy hairdo was her priority. The stylist opted to use my naturally curly hair instead of the sleek Eva Longoria Emmy’s updo communicated to her via email. 🤦‍♀️ Ugh! There wasn’t enough time to ask for a do over so I took one for the team and rolled with it. Little did I know my cousin Ef was having even worse luck; the zipper of her bridesmaid’s dress had ripped the night before and to top it off her hairdo had to be washed out and redone at home because the zipper repair ate up most of her day. Her son, the ring bearer, was all dressed up and ready to go, cooperating fully as he excitedly possed for pictures. Weird how kids actually cooperate when their parents are in a distress state. 🤔🤗

Around 1pm the rain stopped but I was clearly communicated the grass wouldn’t dry in time for the event. 😭🤦‍♀️I pulled up to the reception hall, dress in tow, to meet with the rest of the wedding party to go over the decor, deliver some goods and help me get ready for the first look photo shoot. W’s family lived close by so he ran back home to get ready. He was sporting a flat ironed samurai sword ponytail that was sleek and shiny despite the humidity. I was so jealous because his hair looked betteer than mine. The insult was added to my injured when we walked and saw this: 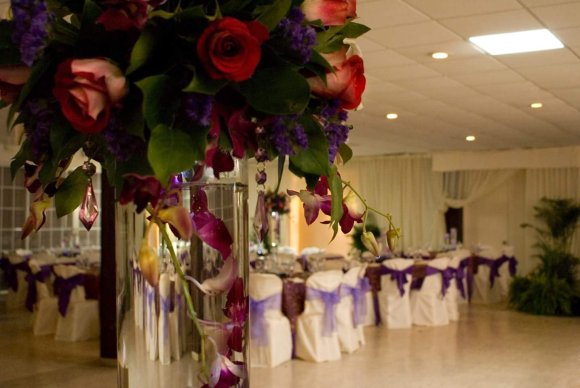 Notice something wrong? Look closely at the big huge flowery centerpieces. Yes, there are two! (The second one is on the table with the lighter color bows in the background.) I clearly recall saying I wanted 12 in high centerpieces with candles on ALL tables. Who authorized this? My  decorator apparently made the call because she felt pressured to differentiate the parentals tables and make her friends feel special on their son’s wedding day. The faux pas didn’t end ther since there was an added surprise: wine glasses on W’s VIP tables. WTF! Didn’t we clearly state we weren’t paying for fancy glassware? I felt like I was taking crazy pills like Mugatu. There were another minor details amis like criss-crossed table markers (they were all unique airplane and aerospace icons and no one knew which went were) but none as egregious. To top it off my allergies started acting up! I was not a happy bride…

Camille, our photog, was already taking pictures of the set up so we had to get ready for the first look session. W went to his parents’ house (three minutes away from the location) to change. Since my bridesmaids and maid of honor were still in transit, 🤦‍♀️, my college friends and a coworker helped me slip into the gown. Twenty minutes passed since W had left. Calmly, I call the groom’s cellphone and asked for an ETA to which he answered “3:45 pm”. It was 2:30pm and the bus was scheduled to leave at 3pm. 🤔I asked him if he forgot he had to be back to the hall for the photoshoot to which he replied “What photoshoot?” I wanted to get in the car and drive off into the sunset but we were ALREADY married. 🤬😤 I was 0/3 at this point. Whatever I had done to deserve this type of karma better had been worth it!

Unwilling to give up on the first look, I grabbed everyone that was on time and loaded up the bus to catch up with the groom at El Conquistador and do the reveal there. My cousin, the Architect, had coquito for the ride and the driver graciously let us enjoy it. Thoroughly annoyed, with clips still attached to my hair, I fielded calls from the lost souls that needed directions pre GPS, 3G and wifi because they had missed the provided shuttle. When we arrived, my dad greeted us at the curbside bus stop and ushered us up the stairs to the balcony overlooking the pool that had been reserved for us. It wasn’t a bad spot at all! You could see the water if you got close to the railing and you could hear the waves crashing in the distance. The ebb and flow of the tide reenergized me. If the guests made it on time we could catch the sunset and take a few pictures by the beach. 🤞🙏

We snuck into a corner were W couldn’t see me and I made the call to negotiate the logistics. Our choices were the terrace balcony or the atrium, either option worked. As I started to mobilize the available troops his mom and a few puzzled guests shut us down because they thought it was bad luck for the groom to see the bride before the ceremony. Joke’s on me, again, since we were married already! I had to forgo the first look altogether because we had bigger problems, our padrino de bodas, JJ, called to let us know he was on his way. Half an hour passed, no padrino. I called W to ask him why we were being delayed and he told me he thought JJ had called him from the parking lot when in fact he had been 45 mins AWAY. FML. The most punctual people in Borinquen were about to lose their ceremony site because some of the essential personnel were MIA.

Once JJ arived, we engaged Warp Speed, literally. The bridesmaids walked in so fast that the photographer barely caught them going down the aisle. The ring bearer lost his courage and had to be carried in because we had no time to waste. My mom decided last minute to give me away, so my dad split the difference and walked me in with her. The non ecumenical priest decided to mispronounce my name from the get go, much to chagrin of my father in law who kept correcting him from the front row. The ceremony turned into a circus. Everyone, including the bridesmaids, was distracted taking selfies or posing as paparazzi from the otherside of the L shaped balcony.

The officiant opened the mic up to us to recite our vows even though we had agreed we wouldn’t do such thing. Somehow he roped it that he hoped we would live to be 80 years old together. That sentence broke me. Guess how old my grandparents were at the time of their last anniversary a few weeks prior? Grief washed over me, and broke me down, the pain coming forth in a torrent of tears. Being on Defcon 1 all day had finally overwhelmed me. The bride was a puddle of pure raw emotion. You could hear a pin drop in between my gasps for air. W decided to comfort me with the sweetest set of promises. I wanted to believe him but I was skeptical. Was this it? Was the universe trying to tell me something?

There was a little saving grace at the end of the ceremony and first look ordeal: the picture below. My friends used the provided bubble wands during the recessional. The newlyweds were engulfed by a flurry of floating bubbles. I didn’t know it then but Camille managed to capture the moment. All I remember of this moment was telling W it smelled like burgers and fries, which were being grilled poolside.

When they pronounced us “husband and wife” half of my family, and a few VIPs, ran down to the snack shack to get coffee and food. Because of this they are missing from the photo reel. Wah wah wah. Between the wind and the reminders from the staff to move along, we had maybe 12 good pictures with guests, and about two with the sunset backdrop. 0/4

Find out what happened next on The Wedding: Take Two – The Reception.

1 reply on “The Wedding: Take Two – The Ceremony”

[…] of my blog followers know my beef with weddings, and with the post The Wedding: Take Two – The Ceremony and The Reception, so this title shouldn’t come as a surprise but, hear me out. With a […]