In what can only be considered one of those magical moments, my best friend from middle school and I stumbled upon an opportunity to meet up in Orlando. Turns out that until May, you can get a 4 Day Magic Pass or Tickets that average an admission price of $70 USD per park, per day for a total of $279 UDS plus tax! The timing was perfect for a Disney World escapade so we took advantage of the offer. Because of my vacation schedule, I arrived a day earlier than my bestie so it made sense to book a stay at the Resort to enjoy the perks: Magical Express ride from MCO to the hotel, exclusive magic band colors, transfers to and from the parks and extra time inside each venue. 😎

The beauty of this trip was that I had 4.5 days to burn through the tickets, which are actually valid for 14 days after you use the first one. Ideally, you can squeeze in other local attractions, like Universal Studios, without forfeiting part of the package. Makes for a slower paced vacation, no rush required! Walking the parks can take a toll on you if you are not prepared for the extra steps and forget to hydrate. In my case I had 4 days only to pull off the deal. Never a dull moment for this gal.

Right after landing, the Magical Express took me to Disney’s Pop Century Resort. The electronic check in made getting settled so much easier. Definitely recommend that you book a resort stay with your travel plans. It’s a lot more convenient than renting a car and waiting in line at the airport. The counter staff quickly processed my reservation at the airport and sent me on my merry way. Like a boss! I slept about three hours, refreshed and hopped on a bus from the Pop Century Resort to Epcot. My magic band is both my room key and admission ticket/fast pass (FP+) holder. Out of vanity, I changed my room cost included MagicBand for a 2017 limited edition because I booked too close to the date to upgrade it and have it delivered to my current addresss. The band is personalized it if you book 6 days in advanced. (My sister has done this a few times and the MagicBands are meant to be collectables.)

A kid at heart, my advice is that you go straight for the character appearance spots and FP+ Frozen Ever After, Mission Space and one more attraction of your liking whose lines are just insanely long that day. Due to the late booking I had to endure a 75 min wait to ride what used to be Norway’s Maelstrom. If you are so inclined,  drink around the world and enjoy whichever festival is occuring at the World Showcase. Because this was my 7th time here, I only had to worry about experiencing the deltas, the new attractions, which there weren’t too many of and agreed with my late start time of midday. (Curse you Red Eye flights with free movies!) 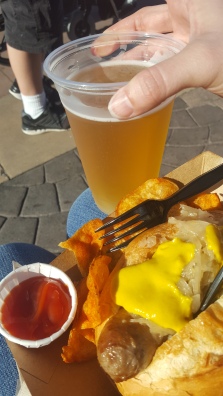 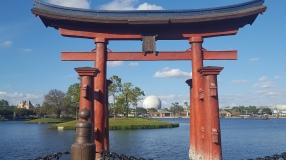 In less than 4 hours, during the next to last week of January arrival date, I was able to check off three rides at the park, 7 character spots, 2 meals and 2 drinks before getting stuck at Frozen Ever After and right in time for the fireworks show, which I FP+. For the next adventure, I included my friends in my app as family to secure FP+ for everyone in the group. MagicBands retail at the ticket office for $13.99 USD, and are tied to your credit card. You don’t have to be a Resort guest to get and use one. My advice, if you plan you to use them, order them online or buy then at Disney Springs (no cost of admission) to avoid wasting time programming them after you enter the premises. Keep track of the expenses though as the app only tracks the FP+, pictures and reservations for your ticketed days.

Woke up around 9am to pack and headed out to Animal Kingdom after checking out and leaving my bags at the luggage assistance desk. The park was full of tours which I was not expecting at all in January. Because it was also a Saturday, the effect compunded and the lines were horrible! 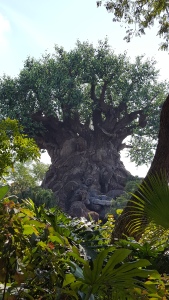 Most FP+ were gone but I managed to snap one up for Explore Everest, It’s Tough to Be a Bug (3D movie) and Dinosaurs which are the premier rides in this park, closely followed by the Lion King show (hourly showings) and the Kilimanjaro Safari. I left without enjoying that last one because of other commitments. Considering the 10am start time, it was not a bad turn of events. Had this been summer time or high season I would have left without getting enough bang for my Magic Tickets on a reduced 4 hr schedule.

Usually, I have a very packed day in this park but due to inclement weather we had to cut our stay short. This was the first day I met up with my friend and her family which meant I had to adjust the pace and expectations. Seeing the Magic Kingdom and Princess meet and greets through the eyes of a six year old is awesome and wonderful but rain can even dampen their young spirits. We did our best to keep her entertained indoors which thankfully there were a lot of places to choose from.

The limited schedule for us included Belle’s Story Time, Mickey’s Philarmagic 3D, meeting Merida, Tiana, Rapunzel, Cinderella, Elena and Snow White. The sun breaks allowed for the parade with Finneas and Ferb, who danced in the streets with the guests. 🙂 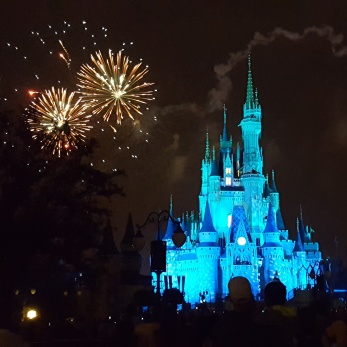 When our kid took a nap, the adults headed out to Splash Mountain, Big Thunder Mountain Rail Road, Space Mountain and the Haunted House. It was raining hard when we hit Big Thunder and we got soaked so it made sense to try for Splash. The Once Upon a Time show was delayed and paired up with Wishes, the fireworks show, and by 9pm we were headed home.

Finding food and tables was a bit harder than at Epcot (assume crowds were greater here even on a Sunday) therefore I settled for the legendary and iconic turkey leg while my friends ate hot dogs. For dinner I grabbed a mac and cheese hot dog from Casey’s, our spot to keep dry and watch the castle shows. It was an interesting day and evening even with the perchances. Still worth the price of admission.

Make sure to check out the limited edition Pandora charms and the MagicBand and cellphone cover personalization booth at Space Mountain in Tomorrowland.

This park is going to become Star Wars heavy after the remodel but will still be balanced with stuff for the kids, like Disney Jr and Frozen. During the first part of our visit we enjoyed the First Order parade, the Star Wars Center Stage shows, Voyage of the Little Mermaid and Indiana Jones (FP+). My six year old pal visited Pixar Place and saw Moana right after taking a picture with Sophia the First while the adult geeks went to take a picture to Chewy and Kylo at the Launch Bay (FP+ available).

After this, we decided to split the group again to maximize the character viewings for the kid and the rollercoaster rides for us. We FP+ Aerosmith’s rollercoaster ride and seriously considered Tower of Terror but decided to wait until they turn it into a Guardians of the Galaxy themed experience. By then it was dinner time and I stopped at Mama Melrose’s for a nice Seafood Cioppino and a Yuengling. (Yes, this park served alcohol too!) A quick ride through Turner Movie Classic’s  film showcase followed so I could stay near the Center Stage for the closing ceremonies.

Even though it was very windy, the Star Wars Spectacular show played right on time at 7:45pm. This light show with shooting star fireworks features all the movie characters and best scenes from the original and new series. It’s about 15 mins long and doesn’t have the flair or Wishes since it is aimed at the fans and not at a Disney/Mickey vibe. For me, it was a nice tip of the hat to their new money maker and a welcomed change of pace since this park is smaller and focused on cinema and the arts rather than just the characters. The souveniers in this park are a bit more techy and many light up! Get your kid friendly lightsabers and join the party.

On the fifth day I rested and set out for the airport. My friends dropped me off at the Epcot taxi line and we said our farewells. Because I have SkyLounge privileges, getting stuck at the airport for a few hours wasn’t a problem. An XpressSpa Massage later, all was well with the world.

If you ever visit the parks hit me up in the comments section for tips and assistance.