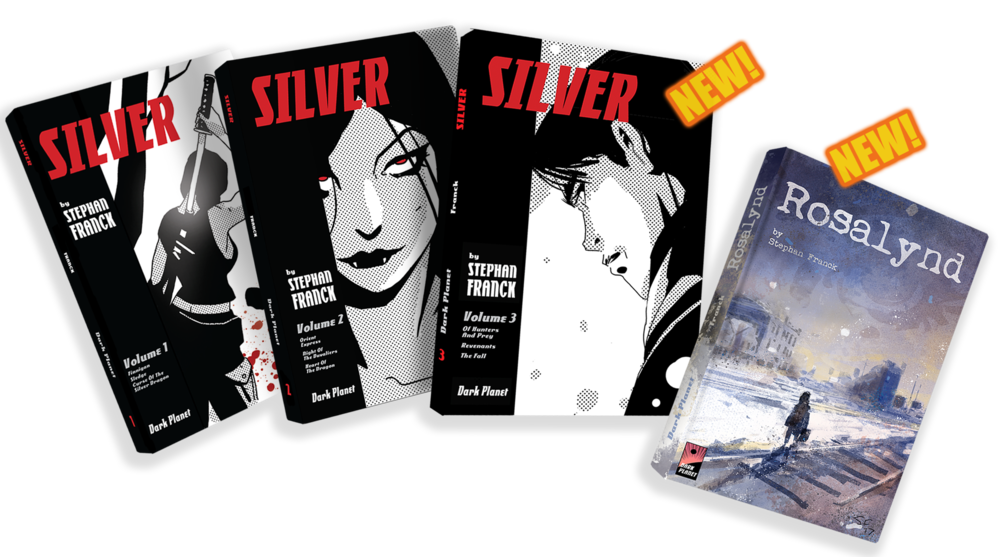 We met Stephan Franck on a Sunday afternoon at the Emerald City Comic Con selling his artwork in a quaint little booth in the exhibitor main hall. What called us to him was the plethora of The Iron Giant prints available for purchase; this had been one of the first movies we had watched as boyfriend and girlfriend, a little after its release in 1999. (Yes, it has been that long!) My husband, ever curious, struck up a conversation with the man in the booth without realizing he was talking to the movie’s art director!

After a couple of minutes, Stephan introduced us to his baby, Silver. Nested between the table displays lay a couple of graphic novels, in black, white and red, with gorgeous noir inspired covers. A mysterious cast of characters danced in its pages immersed in vampire lore. Van Helsing’s granddaughter was featured as part of a con man’s game to find a steal a legendary treasure from mythical vampires. Set in the 1930s, we were immediately enthused by the concept and the effusiveness of its creator, a man inspired to create a movie that magically had turned itself into a comic book fan’s dream read.

The story telling is remarkable, crisp and wry, with gorgeous panels to match the mystery and suspense behind the thrilling narrative. It was so well put together that Stephan ended up developing a stand alone novel for Ms. Van Helsing! The sequence of events leading up to the heist compliment the story so well I could not put the books down. It will be a long and desperate wait to read Vol 4, the last in the series, but a welcomed one if we get to see its writer one more time.

You see, the novel started as a Kickstarter. A labor of love for a man who can paint a picture with few words and many well placed strokes of genius. He invites you into this world and even sets aside pages to explain the creative process behind each panel. As he shares notes on the software (Photoshop and Manga) and tools he uses to lay out the story, he also imparts his Aha! moment wisdom.

I was very pleased to learn he did his best to include women in his fore and background, making the female leads and supporting cast complex, three dimensional, and meaningful. Everyone has a purpose in his story, and no one is set to disappoint. For someone who avidly reads the narrative was neither dry nor predictable. It had the right amount of darkness, sass, suspense and drama of the classic vampire thrillers. The way it is recounted opens the door for an incredible and exciting animated or live action screenplay.

You can acquire the books online or wait until Stephan and his crew attend your local comic convention. We spotted his booth at the San Diego Comic Con and purchased Vol 3 and Rosalynd on the spot! After watching The Iron Giant make an appearance at Hall H’s preview of Ready Player One, I had to tell him the news and say hi. Sadly he was not there, as he was at a panel promoting his work, which we hope to savor once more on both print and film.

P.S. We got a poster of The Iron Giant dedicated to us, and MrEnginerd had him sign the novels with a personalized message. He treasures Vol 3 and Rosalynd, although not signed, because I gifted them to him as a surprise during SDCC. Worth every penny.