Guillermo del Toro wanted to create a horror sci fi thriller that could be made for TV. This was way before he became the father or Gypsy Danger and a world renowned director of the gods and monsters kind. For this project he enlistes Chuck Hogan, and together they decided to enhance vampire lore by adding a zombiesque dimension to what had traditionally been done with the genre. These new vampires could be controlled through a hive mind meld and would be devoid of emotion and feelings. All they would do is feed the thirst and walk the earth looking for humans to consume. 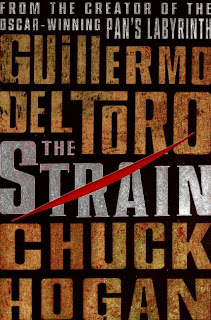 In what starts off as a Michael Crichton novel, The Strain starts with an airplane that mysteriously lands at JFK airport with a dead crew and passenger list. Even though the book uses a 777 as the harbinger of the deadly and unidentified plague, for TV they used a 767. Only nerds will care about this typr of minutiae that has been altered in many ways to optimize the story telling and make it more modern and relatable. From then on the book’s storyline morphes and becomes something a bit more akin to what FX likes to produce: adult situations, violence and language are used to narrate a story that is going to have you wondering what new twist may lurk around the corner. The book trilogy is not ridiculously good but it is very entertaining and FX did a good job of making an okay story into a visual and visceral masterpiece you won’t want to miss.

Ephraim is still our CDC doctoral hero who has to turn fugitive and bad ass in order to save the world. The character, played by Corey Stohl, is everything you read and more becoming not only believable but easy to hate and love at the same time. An alcoholic by nature, he learns to navigate his own demons to be able to fight the Master vampire and his minions. As the story moves, more sidekicks are added into the mix including his own son and estranged wife. If you like gore and vampires this story will make perfect sense but it will be hard to swallow if you are not a fan of the genre. Tread lightly.

The ending of the story is a bit anti climactic but I expect FX and the writters to pull a 180 and get a better resolution. The current season is way behind book wise and there are rumors that we will get at least 2 more years of drama before The Strain comes to a close. Adding more female leads has helped steer the drama in the right direction, and towards longevity, since the ladies of the series can kick ass and take names as well. Smart, beautiful and deadly is the norm in post outbreak NYC. You have to become New York Strong to beat the epidemic and reclaim the lost lands. The survival of the species depends on it and the writers made sure every minority and counterculture in town was well represented in the fight to save humanity.

Look for The Strain trilogy at your local library or bookstore and watch the show Sundays at 10pm. Season 3 is underway and in most places you can rent the episodes for pennies on the dollar. What was once a summer show is now running during fall’s prime time, in case you missed the news. Happy hunting!

4 replies on “The Strain: Vampire Zombies Take Over Manhattan”

I honestly need to start watching this. I haven’t heard much about it but what I have heard was positive. I mean, Del Toro is fantastic. Anything he makes is awesome. Cheers for reminding me of this again. Great blog btw, would you be keen on sharing your work on Moviepilot/Creators? Feel free to shoot me a message (contact details are on my blog) if you’d like me to expand on that. Would love to hear from you.

It wouldn’t be a bad idea to share the reviews. Send me the info. Thanks for the comments and suggestions! 🙂

Hi there, I’m afraid I don’t have your contact details. Mine are on my “about” page so feel free to shoot me an e-mail and I’ll respond with more info. 🙂