Amazon opened a brick and mortar store in the area where I live and originally, I had very little interest in checking out their set up. I didn’t see a reason to cheat on Barnes and Noble which is way closer to my home when lo and behold, one of my friends posted a link of the promotional article that featured a rack of the store. Clearly this was enough to get me into my car and drive my family over to what I now have dubbed “the promised land”. Why the sudden change of heart? The bookcase was titled: Gifts for the Gamer.

There I was in front of a bookcase full of suggested reads for those people in your life that considered themselves gamers. It didn’t just target video game enthusiasts, it also had literature about popular role playing games such as Dungeons & Dragons, and artwork books from popular games. I grabbed as many as I could carry and quickly checked out through their credit card iPad registers when the clerks mentioned that I can also purchase more books online at a discount if i couldn’t find them in the store. That’s how my heaven looks like friends. Speaking of Amazon, if you can’t find these at your local bookseller, swing by their website to check their Top 10 List for all topics. It will be worth it.

The State of Play: Creators and Critics on Video Game Culture, Edited by Daniel Goldberg and Linus Larsson 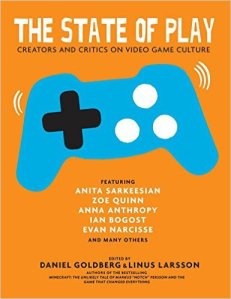 Anita Sarkeesian shares her experience after initiating her Kickstarter campaign to fund Feminist Frequency’s Tropes vs. Women in Video Games. Evan Narcisse discusses his disappointment because of the portrayal of black men in video games. Ola Wikander explores the God inside the machine. These are some of the stories included in this compendium that attempts to address video game culture from all angles and all perspectives touching on women, minority and gender issues while attempting to define and challenge the mainstream gamer identity. Although some of the content can begin to sound repetitive and words like trope and Twine permeate the narrative, the intention of the book is to communicate what has transpired in the industry to get to this point of history and what needs to happen to make the medium more representative of society and its goals. A good read for those interested in learning more about #gamergate, the story behind video games and its intended audience, which is ironically all humans not just 18 to 35 year old males.

All Your Base Are Belong to Us: How Fifty Years of Videogames Conquered Pop Culture by Harold Goldberg 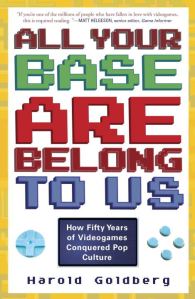 The book narrates the story of video games from their inception into modern times and conveys anecdotes from those who made it happen. It chronicles the rise and fall of Atari, and how Activision and other companies came to play in this arena. Although some of the book reads like intrigue and soap opera type clichés, the end result is that the reader gets a clear picture of how the games went from obscure into the mainstream, transcending consoles and arcades by taking refuge in the PC/Mac world pre and post the internet. Now we all can become players by accessing apps through our smart phones and tablets. Video games have arrived and are here to stay, and if it wasn’t for them, we wouldn’t enjoy many of the processing and graphic technological advances brought by this computer/console based revolution.

By the way, if you are curious, the title of the game was derived from a badly translated dialogue from a video game called Zero Wing from 1991. It has since become a meme and is an inside joke among those who consider themselves old school gamers.

Of Dice And Men by David M. Ewalt 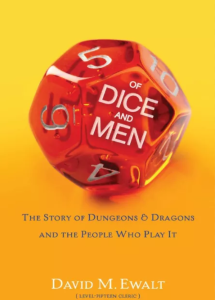 The easiest way to describe this book is as follows: Dungeon Master walks us through the history of Dungeons and Dragons while reading us pages of his most memorable campaign. By letting us into his world of fantasy and mythical quests, Ewalt delivers a story that focuses on the ins and outs of creating the D&D franchise while employing nerdy references and playing rules straight out of the game manuals. You learn about the game and about the players; some comments are made about the audience and reception but no real statistics are used to back the assertions. However, if you have experienced D&D first hand the game play portion won’t surprise you. From the historical perspective the book holds its weight and provides great insight into the development of the genre and its impact on mainstream USA culture. The adventure went global and many kids and adults are playing it to this day. Having celebrated its 40th birthday, this text is testament of D&D’s ability to capture the imagination of those young heart; it makes you want to grab a character sheet, roll the dice and go exploring with a crew of loyal friends. D&D is here to stay.

Reality Is Broken: Why Games Make Us Better and How They Can Change the World by Jane McGonigal This book reads like a PhD dissertation about the psychology of gaming as a whole, with a minor in video game implementation as a social change tool. The discussion about video games and how they make us feel and act is very engaging and although the author uses her own creations and consulting jobs as examples, she also uses popular games and studies to prove her points. For some, the book may seem self serving but I can’t blame her for using her experience to establish her street cred; most books are written to exalt and tout being knowledgeable of a subject. If you have children or are an avid gamer, you will benefit from the ideas explored as they help cement why video games are here to stay and how they can make reality better by influencing the way we learn, teach and interact with the world and each other.

Console Wars: Sega, Nintendo, and the Battle That Defined a Generation by Blake J. Harris. 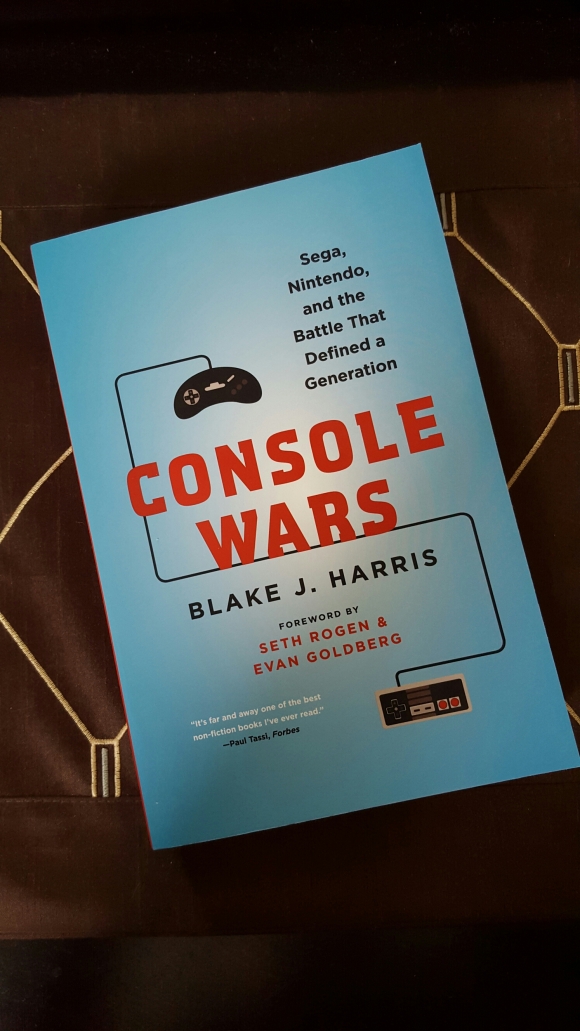 This was by far my favorite read out of all the gaming books. Writen like a novel, full of dialogue, intrigue and twists, it did a fantastic job of communicating the tension and competitive nature of the Sega-Nintendo relationship. You feel the excitement that Team Sega experienced when they finally bested Nintendo, and the character portrayals are genuine and are not caricatures. Even though it was 500+ pages, I couldn’t put it down! Riveting and engaging, I ended up wanting the book to have more pages. Thankfully, there is a documentary movie in the works based on the material, and I am sure it will not disappoint. If none of this convinces you, check it out for the historical recount of the 80s ad 90s gaming and developing atmosphere.

Ready Player One by Ernest Cline

This fictional work of literature puts our main characters on a quest to find easter eggs inside a video game to discover the path to a prize that would set them for life, awarded by none other than their in world father of modern internet-based massive online gaming. Spielberg has been set to adapt and direct this epic story that will be full of 80s references and hard core gaming strategies. If you don’t end up falling in love with this book, the only possible defense you can have is that you are too young to understand the references. For Gen Xers and older Gen Y/Millennials, this will be a joy to read and watch on the big screen.

One reply on “Books To Feed Your Inner Player: Video Game Culture Reading”

[…] titles about video games and related subjects. The ones I purchased were reviewed under the title Books to Feed Your Inner Player which got me up to 50 books read for 2015. Now that November is almost over, all I need are five […]