I don’t know about you, but I am still annoyed that when Conan O’Brian was promoted to The Tonight Show, nerds failed him and didn’t support his bid to take over prime time. After he fought NBC for the rights to all his comedic bits, losing Triumph the Insult Comedy Dog in the process, TBS gave him a shot and he continued to produce nerdy comedy. Soon after, all the networks followed suit and from Jimmy Fallon to Chris Hardwick, nerds took over the airwaves. All of a sudden, the airwaves were ruled by references to Star Wars and Lord of the Rings, to the point that Stephen Colbert (it’s French) and James Franco openly discuss the subject on national TV. What changed? 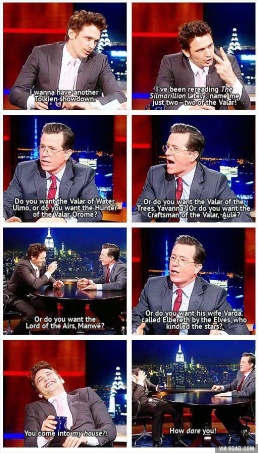 My theory is that as Gen Xers and Millennials entered the work force, their eating and sleeping habits changed temporarily, which pulled some viewers from the show. Also, all the generations started to get hooked on internet streaming and Netflix, things the mayor networks hadn’t adopted. Team Coco was the first of many comedians and hosts to embrace Tweeter and social media to keep his career alive and his jokes relevant to the times. He managed to recruit us all back into prime time via DVR and streaming. I refuse to believe that Conan stopped being funny but if he hadn’t campaigned so hard after his dismissal from NBC, we wouldn’t have the nerd TV revolution we have today. Social media has taken a foothold into what stays current and what doesn’t.

Recently, cable networks have redefined the meaning of success based on retweets, reposts and likes. That too started to turn the tide. Nerds are cool and funny again.

Which begs the question: Is nerd culture now the mainstream? Are we as a society embracing our inner nerds, exalting the smart and brainiacs and banishing the jocks and jerks into oblivion? Is this what is making so many people angry and afraid? I believe the answer is yes. Just look at the many Steve Jobs movies and documentaries that have popped up, and the many series and documentaries on computers, technology and nerdology; shows like The Big Bang Theory and Game of Thrones have proven that the nerds have taken over and are here to stay. The discourse in this program is deeper and dependent on scientific discussions and fantasy literature and lore, respectively. The audience is expected to rise to the level of the jokes and to follow the dialogue which is foreign to most of us outside the nerdomsphere. They are easy to follow for those who are already familiar with the themes but remain relatable to those who aren’t. I wish I could say people are not just supporting the geeky and nerdy themes but embracing them, though in reality they are just posers.

Most modern nerds are into the culture because of film and TV adaptations of popular books and traditions of our people. They don’t really read comics, anime, books or graphic novels. They don’t know the back stories for Superman or the new 52 not have ever played a table or live action role playing game. They weren’t the “weird” students in their class that knew everything nor have an action figure collection that makes rivals green with envy. Some have been called hipsters, and to the hardcore nerds they are nothing more than fake copies, mixed a little with what yuppies used to be.

You can’t imagine my chagrin when I bump into one of these posers. After years of looking for my brethren, I noticed most people did not share my passions even though they wore the action hero t-shirt and could talk about my favorite novel’s subjects. It became frustrating to go to the movies with a pseudo-nerd and get into an argument over why the content wasn’t true to the original material. People would try to convince me that the book and the movie were two separate things, in part that justify why they weren’t going to read it regardless of my insights. I started to dread adaptations. They seemed like a losing proposition to me.

Part of me wishes it was 1999 and I could hear Conan and Andy do their rendition of “In the year 2000”, back when nerds weren’t cool. Sharing my culture is hard enough as an introvert, and now I feel I lost a part of myself because everyone thinks they can now relate to me. Star Wars Episode I was

my first experience with the phenomena, and now everyone seems to be a fan especially because of all the marketing Disney has done to promote Episode VII. We seem to have lost some of the authenticity, as our heroes have had to sell out to make a buck or two out of their masterpieces.

As part of my personality becomes a bit more commercial, I will positively embrace purchasing items through Think Geek and reminiscing about the parts I used to buy at Radio Shack to fix electronics around the house. If only people were inspired to hit the books and get their PhD by the success of the nerds or yore, life would be so much grander. Sadly, at the rate we are going, there will be less people studying to build iPhone and iPads and more people trying to get rich fast using them. That is the downside of popularizing science and technology; people start to lose the respect for the people who build and support all the platforms necessary to sustain modern life, like transportation and communications, and no one is presenting heroes to emulate and follow. My hope is that just like Star Trek and Star Wars inspired a generation to innovate, Hollywood will continue to produce movies like Interstellar and The Martian, inspiring a generation to look into infinity and beyond. Maybe we can get a lightsaber and a hover board sooner rather than later. 😉

In all fairness, someday, historians will have to give pioneers like Conan the credit he deserves (and we can throw Jon Stewart in there too for good measure). Nerds rule, and as uncomfortable as that makes me, I will ensure that the nerds of the future remember where they came from and the people that made us mainstream. (Yes, I am talking about you too Weird Al.) The revolution may have started in the 1970s, and it took a few years to catch on. In the meantime, while this phase and obsession passes, if anyone needs a Magic partner or a good gamer for their Call of Duty squad, you know where to find me.

All pictures, show titles and logos are property of their respective owners. Credit goes out to them.